The helmet Bacinet with cross – battle ready edition of one of the popular medieval helmets.

Historical Analysis on the “Bacinet with cross” helmet design

The bascinet (also bassinet, basinet, or bazineto) was one of the most prominent designs between the enormous variety of European helmets from late 13th, during the entire 14th century and even early 1400’s, including during the Hundred Years War.

Constructed with a pointed apex to the skull, intended to direct blows from weapons downward and away from the skull and face of the wearer. Extending downwards at the rear and sides to afford protection for the neck, the bascinet usually had a mail aventail attached to the lower edge of the helmet to protect the throat, neck and shoulders.

Regions where rich citizens were fielded as infantry, such as Italy, and other lands producing specialised professional infantry like Germany where the epicentre of the occurrence and production of this helmets in its mostly varied forms and configurations.

Such helmets varied a lot in shape, especially in terms of face defence, going from open faced to completely encased visors. The specific design with a central protection extending from the mail aventail was very popular in continental Europe, and has many variants, including a detachable nasal piece¹ (known as “bretache” or ”nasal”) or simply pulling the mail upwards and hooking it to the face opening.

The design found in the reproduction is seen  specially in  the helmet in the Stibbert museum’s armoury, in Florence (Italy) which dates from around middle 14th century (circa 1350-1360), known as “the cross bascinet”. 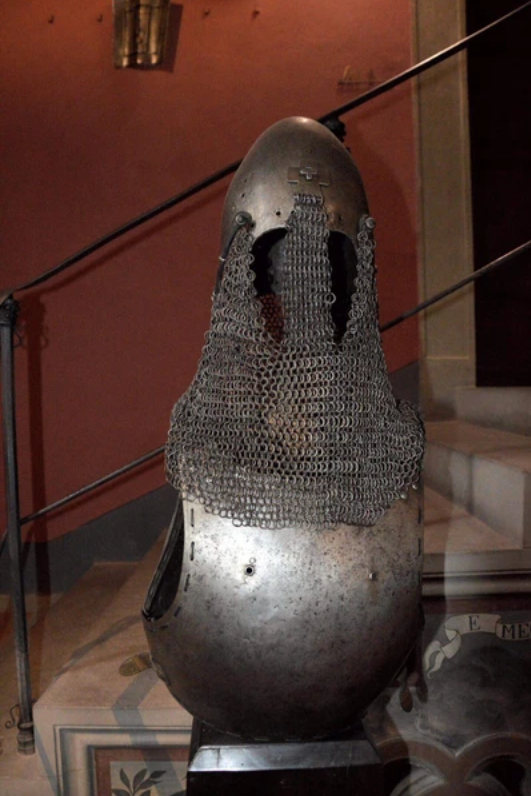 Its design follow the usual lines of any bascinet from the period, with a simple mail aventail, but the point where it diverges and becomes peculiar.

The reason for such name, is the mail from the aventail which is hooked directly to a cross shaped piece in the forehead, forming a very characteristic face profile, offering at same time relatively good protection without compromise nor vision nor breathing capacity.

The same design, this time with a less pronounced point in the helmet skull, can be seeing also in the reliefs of Doge’s Palace, in Venice, with the characteristic cross shaped attachment system and absence of a nasal plate, consisting the protection solely from the mail. 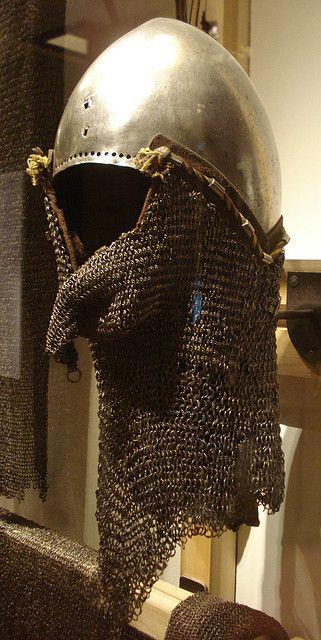 Similar designs can be seeing in extant examples all around western Europe. For example the bascinet in the Deutsches Historisches Museum , dated to around 1350-1370. It which shares a lot of similarities with the exemplar from Florence, except it does not have the peculiar cross shaped piece. 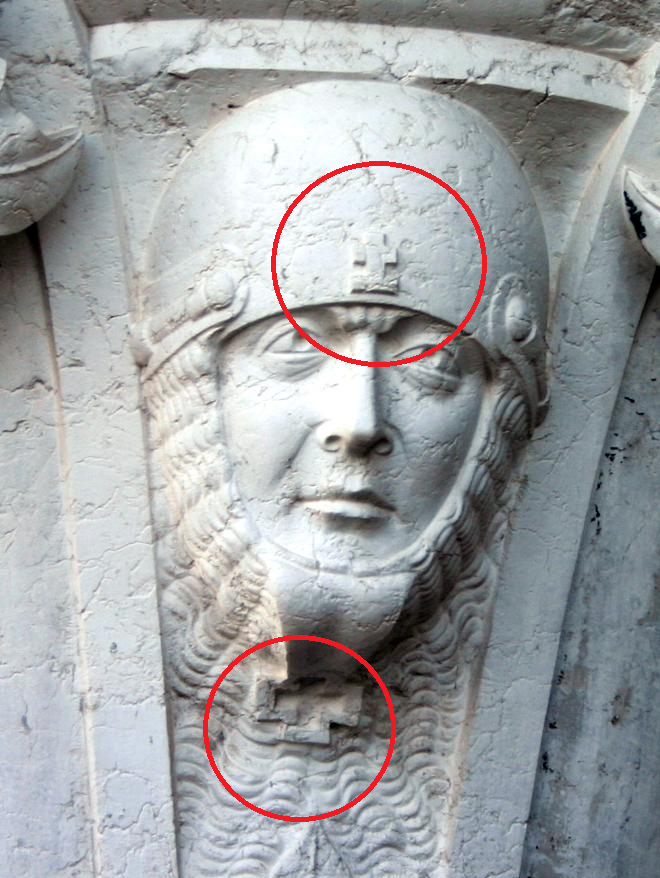 All this variants of the bascinet could be worn under a great helm. The helmet afforded some facial protection when the great helm was taken off. This versatility, aligned with the less laborious manufacturing  process sure were factors which made this designs are popular, especially among infantry, where visibility and breathing were crucial to the exercise of the war metier.

Its important to  point the “bretache” design and it’s variants were never quite popular in the United Kingdom, in fact there are no period sources showing its use in Britannic lands, which tend to prefer more protective designs with fully plate encased visors or even the total lack of bascinet visors, being this a continental tendency only.

Conclusion for Bacinet with cross

Based on this information, it can be said that the reproduction of the “Bacinet with cross helmet” type is suitable for kits that intend to reproduce armor of men of arms / infantry from continental Europe, specially Italy, between the years 1330 and 1370.

What are you looking for?