The Advanced longsword (also spelled as long sword or long-sword, known as bastard sword) is a type of European sword characterized as having a cruciform hilt with a grip for two-handed use and straight double-edged blade.

Analysis on the “Advanced Longsword”

The purpose of this essay is to state the historicity of the sword design in question, to classify it accordingly  to the major typology systems which deal with medieval European swords, and to establish the possible compatible combinations of arms and armor. 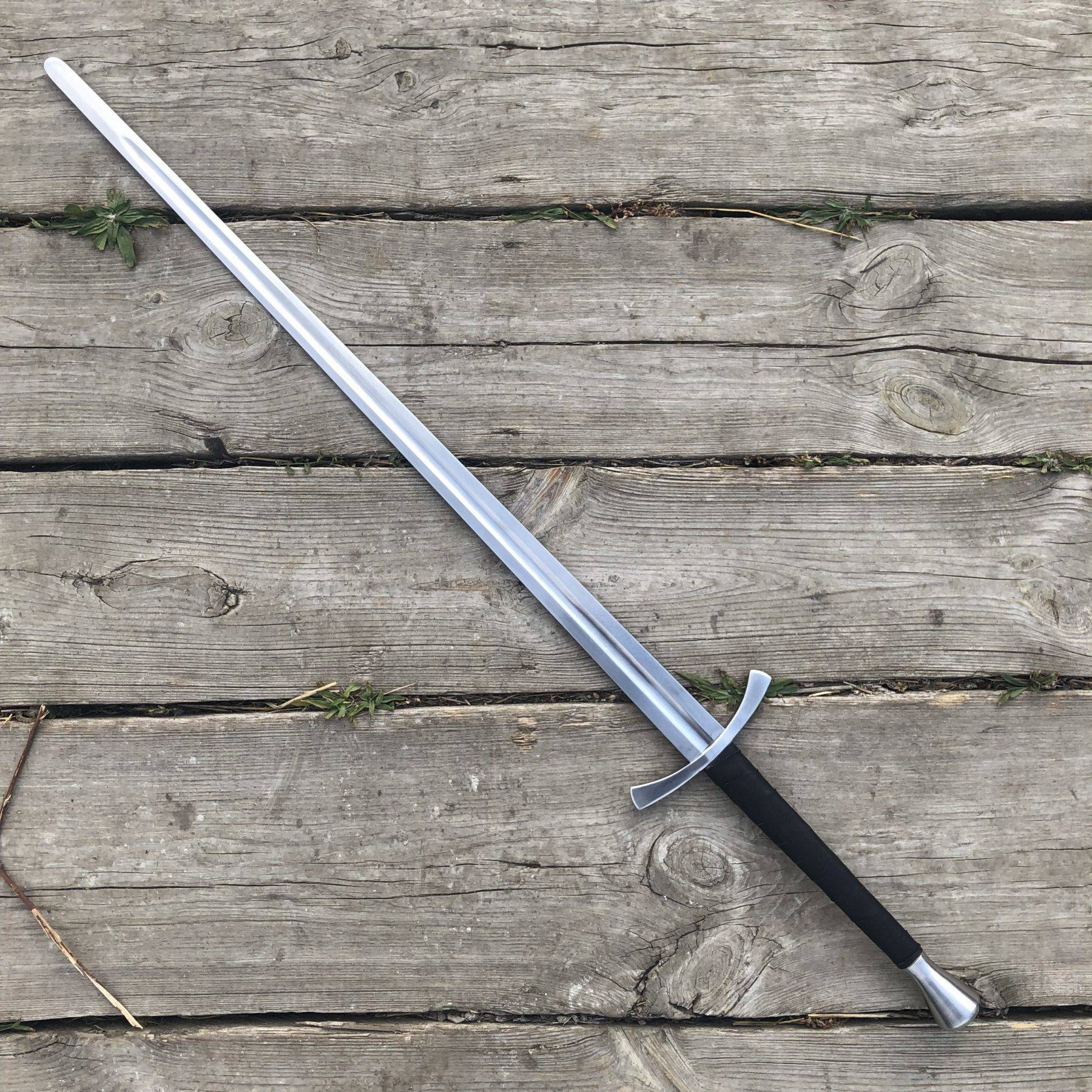 The term “longsword” generally refers to the double-edged sword design endowed with a handle and blade longer than most of swords. The first bibliographic mention in historical sources about long two-handed swords is recorded in the Novel of Alexander from around 1180, however, the physical evidence for such weapons first appears only in the 13th century.

The weapon becomes very prominent between the late medieval and Renaissance periods, in which it varies in function, from tool of war to self-defence implement, and even as fashion and judicial resource, as in the “trials by combat”. It varies a lot in shape, both the blade and the hilt components such as guards, handles and pommels. This happens, at least in part, due to the nature of the sword production activity, in late middle ages, which involved rarely only a single artisan: instead, the sword manufacture process was composed by a series of different stages, with generally a “swordsmith” making solely the blades, and jewellers and other artisans (like wood and leatherworkers) making other parts of the weapons.

All these individual parts were then combined by the professional known as “cutler”, who assembled and effectively “sold” the sword to the final client. This complex process leads to an enormous variety of “longswords”, where some where even reshaped though the years, having pieces modified or replaced, even the entire blades.

In modern times, the term became synonymous of swords  longer than the “arming sword” (the classical “knightly” one handed sword) and shorter than true “two handed swords”, like the german Zeinhanders, Italian “spadones” and the Spanish/Portuguese “espadon”/“montante”.

About the design’s classification according to the Typology of Oakeshott

Ronald Ewart Oakeshott (1916 – 2002) was a British collector, and amateur historian who is  considered as one of the most preeminent scholars in the research of medieval European arms and armor, being one of the first to systematically classify this objects.  Inspired by  Jan Petersen’s work on weapons from the “Viking Age”,  Oakeshott classified the swords which shared the same basic characteristics into “types”, including a classification of hilt components.

This culminated in the most popular sword classification: the so called “Oakeshott Typology”.

The exemplar in question, despite being a sportive adaptation, can still be classified according to Oakeshott:

Accordingly to blade type:  The blade, with a central fuller towards almost all is extension, its most similar to that of type XIIa (accordingly with the revision of Oakeshott’s typology, where he re-classified this sword blade as “sub type XIIa”. The overall shape is seem in various examples from  14th and 15th century examples as follow:

Figure 3 – This object is listed as from a private collection in Oakeshott’s work, and his locations is unknown (ca. 1350-1400).

Figure 4 – Item sold at auction from Bonhams, in 2009.Provenance: The Late Mrs. G.E.P. How Collection, UK. (ca. 1350). This object has a vagally similar guard to the one present in the Medieval Extreme reproduction.

The distinct trumpet-shaped terminals in the handguard is classified as “style 6”, with some resemblance also with “style 5”. It’s important to highlight the length of the hand-guard was shortened due to HMBIA safety regulations, however, the general shape is still similar to that of historical analogues, being this a necessary adaptation to comply with the sport rules.

Figure 6 – Item sold at auction from Bonhams, in 2013.Provenance: Unknown (ca. 1350). This object has a similar guard to the one present in the Medieval Extreme reproduction

The “pear” shape of the pommel can be easily fitted in the “Type T”, subtype 5.

Figure 7 – Item sold at auction from Bonhams, in 2008.Provenance: Viktor Monetti Collection – Galerie Fischer, Lucerne, 17 June 1993, lot 8087(ca. 1300-1450). This object has also similar guard to the one present in the Medieval Extreme reproduction.

Conclusion about Advanced Longsword by MedievalExtreme

Considering all the extant examples here presented, the reproduction in question can be classified as a “longsword type XIIa, with cross guard style 6 and pommel type T5” according to Oakeshott’s sword typology.

Even with all the adaptations and safety modifications, the Advanced longsword in question still similar enough to historical examples from 14th to the first half of 15th century, being adequate to be used in congruence with European armor from the period. It is valid to highlight as well that the sword, as a sportive implement, meet all the standards established in both HMBIA and IMCF ruleset.

OAKESHOTT, R.E.  The Archaeology of Weapons: Arms and Armour from Pre-history to the Age of Chivalry. Lutterworth Press, London. 1960.

What are you looking for?